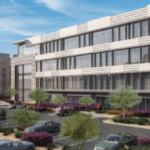 Here’s a quick look at the major highlights of the year in commercial real estate in the Valley, with the top story from each month:

A bankruptcy court ruling opened up nearly 5 square miles of land near Desert Ridge Marketplace. California-based Crown Realty and Development acquired 96.5 acres of the land and master developer rights to a total of 5,700 acres.

Crown CEO Robert Flaxman was arrested later in the year in connection with a college bribery scheme that implicated dozens of high-net-worth individuals. Flaxman was sentenced to one month in prison for his role, but the project remains underway, and horizontal improvements have begun on some portions of the site.

Meow Wolf’s Phoenix location, which will be built at 811-817 N. Third St., will include a 75,000-square-foot exhibition area complete with a 10,000-square-foot music and performance venue. The Phoenix location also will be Meow Wolf’s first to include a hotel, which will be approximately 400 rooms designed by local artists that explore all forms of overnight experiences, including faux-glamping, capsule rooms, communal hostel environments, absurd luxury suites, as well as lodging inside the art exhibition itself.

The Phoenix City Council approved the redevelopment of Central Station by Medistar Corp., which will include a 300-foot, 30-story tower with apartments and hotel. A smaller 200-foot, 18-story tower will include the student housing component. A third, three-story building will be on the site, according to information from the city. The project will cost $231 million to develop and will total 1.1 million square feet.

Pivotal Group submitted plans to the city for a 2.3 million-square-foot mixed-use project near Steele Indian School Park. In total, the project will include six towers, ranging in height from 165 feet to 355 feet, and will have office, hotel, residential, senior living and retail space.

The development also will include two 355-foot residential towers, which will total 400 apartment and condominium units. A 165-foot tower is proposed for 200 units of senior housing.

Nationwide Realty Investors, the development arm of the insurance company, is preparing to build the 460,000-square-foot Nationwide office building and a six-story parking structure on the southeast corner of the site on 30 acres of land.

At buildout, the 134-acre master-planned development will include Class A office space, apartments, retail, restaurants and hotels, according to a site plan provided by Nationwide when the company unveiled plans for Cavasson in November 2018.

Nike confirmed it planned to buy a building in Goodyear to manufacture the soles that go into Nike Air sneakers.

The announcement came more than a week after Arizona Gov. Doug Ducey announced in a series of late-night tweets he had ordered the Arizona Commerce Authority to withdraw about $1 million worth of discretionary incentives from the shoe manufacturer due to Nike’s decision not to sell a shoe featuring the Betsy Ross flag for the Fourth of July. Nike bought an existing building in Goodyear and will invest at least $184.5 million on the first phase of the facility, which will employ at least 505 people.

Deloitte announced plans to double its footprint in Gilbert and hire 900 more people, in addition to the 2,500 people the global business consulting group announced it would hire in 2018. Deloitte moved into the first building at the Commons at Rivulon in Gilbert at the end of 2018, and will occupy its second 100,000-square-foot building in early 2020.

The $300 million, five-building Museum Square project planned for an empty transit station in downtown Scottsdale was approved by the city, and the developer has set its sights on starting construction during the second half of 2020.

Also that month, Pederson Group revealed plans to build a mixed-use tower in midtown Phoenix on a site that has been encumbered by billboard easements for decades.

The project received zoning approval for 350 feet in height for the building, which is consistent with nearby developments, which could allow for between 15 and 18 stories.

Vital Pharmaceuticals, the maker of Bang Energy drinks, bought a nearly 400,000-square-foot manufacturing plant in Phoenix where the company plans to hire at least 300 people.

The company bought the building for $53.32 million, and plans to invest more than $260 million in Arizona operations, according to a company announcement. The manufacturing and distribution center, near 43rd Avenue and Buckeye Road in Phoenix, will be used to manufacture drink products called Bang, Stoked and Reign.