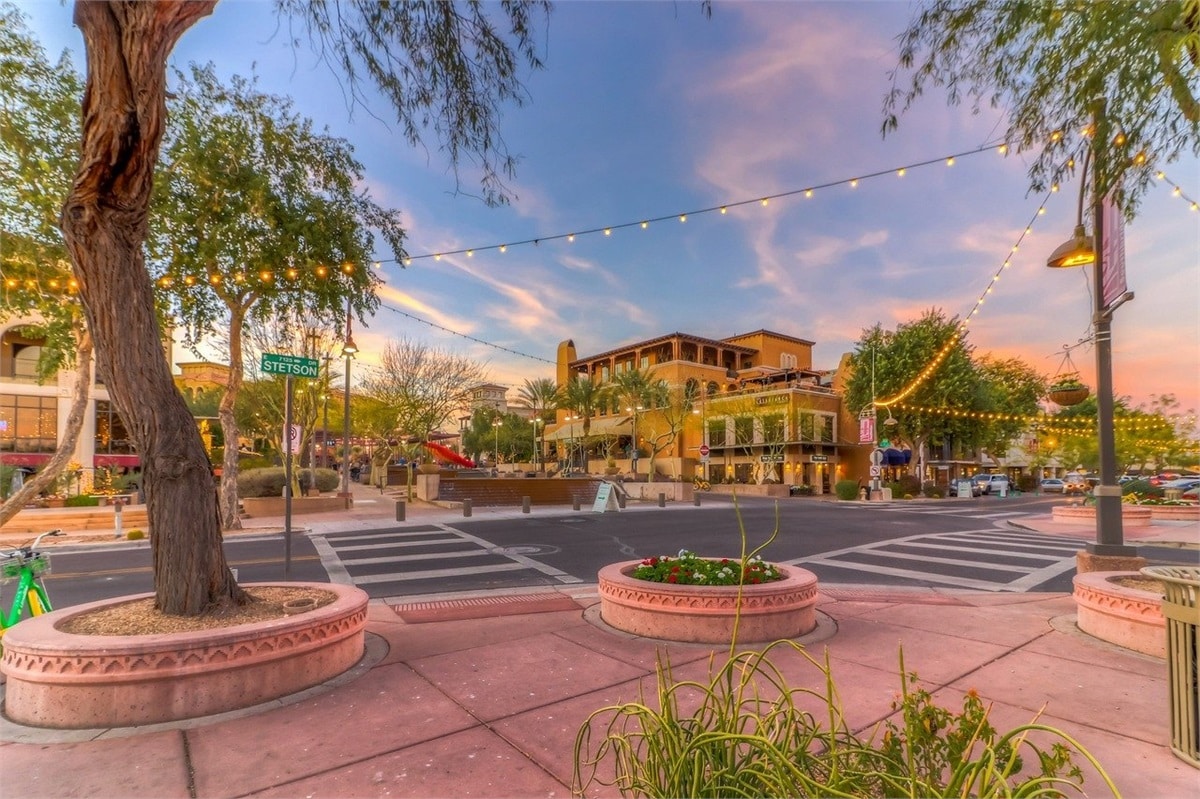 A proposed redevelopment of much of downtown Scottsdale’s Entertainment District will go before the city’s Planning Commission on Tuesday, Oct. 27.

The Scottsdale Collection would replace a handful of bars, clubs and office space with 580,000 square feet of commercial space, hundreds of apartments and hotel rooms and buildings as tall as 150 feet.

The project would also include new public art projects and pedestrian improvements aimed at improving connectivity with the rest of downtown.

The developer is asking the City to rezone the area to type 3 commercial from a mix of type 2 and type 3 parcels, according to the development plan. If approved, that would allow the project to include buildings up to 150 feet tall.

The plan proposes a 150-foot-tall building at the southeast corner of Scottsdale and Camelback Roads and buildings between 32 and 141 feet tall further east.

Current entitled heights in the entertainment district vary widely, ranging from 34 feet at the southeast corner Scottsdale and Camelback Roads to 90 feet at The Stetson Apartments and 150 feet on the site of the Marquee office building.

In the Collective’s plan, the developer is asking the city to significantly reduce stepback and setback requirements for the buildings.

According to a city staff report, the developer is asking to reduce required setbacks by up to 20 feet at certain locations and is asking for zero stepback on a 90-foot hotel next to the Maya Day and Nightclub despite city rules requiring stepbacks beginning at the 45-foot mark.

The development is the latest and most ambitious project from brothers Shawn and Steven Yari, who own Stockdale Capital Partners and several notable properties downtown, including the Galleria Corporate Centre property and W Scottsdale hotel.

The Yaris have purchased and developed property in downtown Scottsdale for over a decade and have a number of projects in various levels of entitlement or construction, including the Marquee office building and Canalside apartments.

In all, the Yaris’ plan to redevelop about 6.5 of the over 20 acres they own in and around the Entertainment District.

The duo also owns significant property in the Entertainment District, including buildings that house popular bars and clubs like Maya Day and Nightclub, and already has plans to redevelop one of its buildings in that area into a medical marijuana dispensary and boutique office space.

In 2019, the Progress first reported the Yaris were planning to redevelop much of their property in the district, a small area of land on downtown’s northeastern edge flanked by the W hotel to the west and Galleria to the south.

Shawn Yari pitched the project, then called the Scottsdale Collective, to a group of prominent residents in December 2019, calling it a way to bring visitors back to downtown who were drawn away by shopping centers further north.

“You know the Palmeraie is happening up there, right?” Yari said, referring to the Ritz Carlton-anchored development north of downtown.

In 2019, Yari pitched the project as a piece-by-piece redevelopment, not a single massive project.

“This isn’t a blank canvas. This is a successful entertainment area in downtown Scottsdale,” Yari said. “The opportunity is piece by piece, time to time, there’ll be a piece of that canvas available for me to develop.”

The Scottsdale Collection has several major components, including the City Center parcel, which would include over 200,000 square feet of commercial space and 146 residential units along with a public art and park space and heights up to 150 feet along Scottsdale Road.

“You have essentially an elevated park at your signature intersection,” project spokesman Jason Rose said. “I think (it) is really going to have a wow factor and be a point of pride for the community.”

The development outline also includes plans to replace the former Mint nightclub on Camelback Road just south of Scottsdale Road with a 116-room hotel and 28,000 square feet of restaurant or retail space.

The developer is also proposing a second 165-room hotel next door to the existing Maya Day and Nightclub.

That would also include space for a restaurant and retain around 23,000 square feet of existing commercial space.

According to plans on file with the city, these major pieces of the project are separated into three phases.

Phase one would include the Maya Hotel followed by the City Center parcel in phase two and the Mint hotel in phase three.

A fourth phase would include smaller projects along Wells Fargo Avenue and Shoeman Lane.

In 2019, Shawn Yari said total build out of the redevelopment could take 10 to 15 years.

By virtue of its sheer size, height and reduced stepbacks, the project is likely to garner some opposition from locals who have fought against other attempts to bring taller, dense developments to the downtown area.

Southbridge Two, a proposed redevelopment of 10 acres in 5th Avenue shopping district just west of Scottsdale Road, faced a voter referendum after the City Council approved it in 2019 and was ultimately cancelled by the developer.

Like Scottsdale Collection, Southbridge Two sought to take advantage of allowances for heights up to 150 feet in a downtown’s Type 3 zone and would have significantly increased density and massing in the area.

But, in 2019, Shawn Yari said he did not anticipate facing the same type of backlash that ultimately killed Southbridge Two.

Yari argued the Entertainment District is a distinctly different area than 5th Avenue or the Arts District further south and that its buildings lack the charm or history associated with other neighborhoods.

“I don’t think you go in there into the quaint areas where the art galleries are and knock them down to build high rises. That’s insanity,” Yari said.

“But if (an area is) underutilized and there’s an opportunity, take the opportunity.”

The Planning Commission will consider The Scottsdale Collection at its meeting on Nov. 28 at 5 p.m.

The project is then scheduled to go before the City Council on Dec. 2.