Multi-billion-dollar Akimel 7 planned at Loops 101 and 202 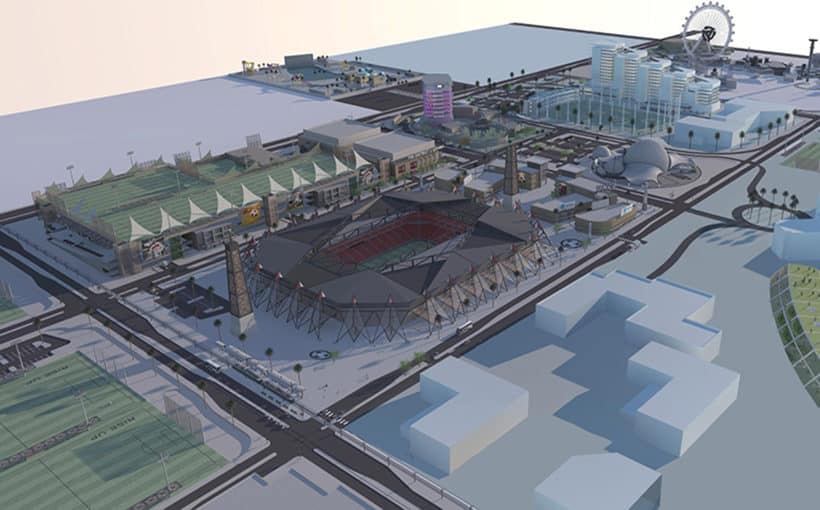 Cameron Colvin, chairman of CamCo Commercial Inc., today announced that The Solanna Group LLC and CamCo Commercial have formed a joint venture entitled “Akimel 7 Productions,” to include a land lease arrangement to develop a multi-billion-dollar next generation sports and new media entertainment destination called Akimel 7 at Loops 101 and 202 in Scottsdale on the Salt River Pima Maricopa Indian Community.

Akimel 7 is the future of sports and smart facilities enabling athletes to achieve optimum performance and fans to experience world leading sporting events. Akimel 7 will include 1) entertainment from production studios delivering film, to futuristic VR immersion theme park engaging visitors in ways never before seen and fashion houses churning out evolutionary brands that turn heads; 2) technology showcasing tomorrow’s medical discovery, artificial intelligence and robotics all in a zero-carbon environment.  And, 3) architectural innovation fueled by self-correcting solar power grids, complete loop water recycling, and automated transport network.  Akimel 7 will also serve as a center of international finance and hub of connectivity, and is located in a qualified opportunity zone giving competitive advantage to investors.

The Solanna Group is a Native American family-owned real estate investment firm that controls over 125 acres in Akimel 7 and is the sponsor of the empowerment model of leasing and development which is the first of its kind in Indian Country and a model that enables simple, fast, and efficient high-quality development on federal trust property at levels never before seen.

Cameron on Akimel 7, “Our aim is to create a dynamic interactive entertainment experience.  It is about immersion into the alternative reality of going beyond the day to day feeling of being merely human. It is about hope and inspiration. Using state of the art modular design as we plan,will enable Akimel 7 to grow and continuously change over time without having to redesign or rebuild, providing sustainable integrity”.

Solanna is directed by CEO David Fordon, formerly the president of Salt River Devco (2001-2004) and architect of the Generation Seven plan for the Pima Commercial Corridor winning the 2004 1st Place Award for Master Plans of Distinction from the International Property Federation. Mr. Fordon brings considerable Native American experience to the Solanna Group having worked prior to Salt River, assisting tribes in the Pacific Northwest to implement multiple self-determination initiatives.  Fordon is a former Washington State Economic Ambassador in Japan and served as Coordinator of Relations under the Japan Ministry of Foreign Affairs assigned to Niigata Prefecture to facilitate internationalization programs fostering Soviet Union, South Korea, and Chinese economic relations. Fordon, an ocean architect, was also concept development consultant for Walt Disney’s Living Seas at EPCOT and Tokyo Disney Seas Japan.

Solanna President, Claire Miller, a former three-term Council member for the Salt River Community and Solanna family-landowner is entrusted by the family to be actively engaged in all aspects of company development, landowner, tribal and public relations. Solanna’s Board of Directors welcomes the partnership with CAMCO and Board Chair, Anna Lee expressed, “Our vision for this special relationship between Solanna and CAMCO is to evolve as a creative long term venture of shared values for world class development on the land of our ancestors leaving a legacy of pride for our families, the Salt River Community, and the Valley for seven generations”.

Solanna and CAMCO plan to start construction in the next two years of several brand projects aimed to support Akimel 7 objectives. We are in the late stages of being able to announce an international brand as part of our development. This sporting use will be fully aligned with the high quality value proposition of Akimel 7. Additional projects are currently confidential. Akimel 7 is also currently home to the 2019 Supporter Shield champs of the United Soccer League, Phoenix Rising FC.